Truth in the Global Media Age by Prof. Clifford Christians 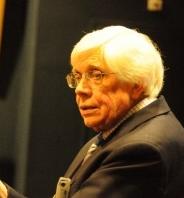 Clifford Christians is one of the leading academic figures in the world of media ethics. The recipient of numerous awards, Professor Christians currently serves on the editorial boards of a dozen academic journals and is Professor Emeritus of Communications, Media Studies and Journalism at the University of Illinois. In this lecture, Professor Christians discusses ethics in the age of global media.

University Professor and researcher Clifford Christians discussed ethics and truth in the age of global media last Wednesday, April 18, in the Auditorium of Balkanski Academic Center.

Christians talked about the crisis in the concept of globalization and how that affected media ethics and the portrayal of truth in media.

“For all the promise of this electronic age, there is a meltdown sociologically,” Christophers said, “truth is under attack and should be rescued and redefined.” Christians put forward his definition of truth as “authentic disclosure,” coming from the Greek word “aletheia” – the truth in context.

Christians quoted Jacques Ellul, a French jurist and philosopher who called the impact of technology on western society “la technique” – when efficiency in delivering news is more important than the way of delivery itself. Thus, life becomes not immoral, but amoral – with ethics lost somewhere in-between the transmission of facts. “La technique doesn’t stand criticism,” Christians said, “it isn’t free.” In the dawn of this global crisis, authentic disclosure more than ever is “the meaning of truth.”

Christians relayed his idea of aletheia, “the trademark of media ethics,” with three examples of contemporary media outlets – Al Jazeera, Photojournalism and WikiLeaks. “Truth is the standard by which we should judge the digital revolution in media,” he said.

The first example was Al Jazeera – “born in war and centered in turmoil ever since,” as Christians presented it via its coverage of Afghanistan, Iraq and the Arab Spring. But “is it the home of sensation and bias rather than of aletheia?” he asked, commenting on the almost exclusive rights Al Jazeera had on the Iraqi bombings and its sophisticated technological form of reporting. “Does it get caught in the instrumentalism of the technological order,” Christians asked. Does it follow the camera and let it define news or does it see under the surface, meeting the standard of aletheia? Does it disclose news or does it do propaganda in covering the grisliness of war? “True, bloodiness is part of the story,” Christians said. But covering bombings, death and destruction is only the surface issue, he continued, it is not authentic disclosure because it doesn’t see the ultimate question under the surface – are the wars in the Middle East just? “Do you enable, as Al Jazeera, your audience to see beneath the technological surface of all the bombs and drama to the fundamental issue of whenever or wherever war can be justified,” he asked.

The second example was photographer Kevin Carter whose picture of a starving Sudanese girl brought him a Pulitzer Prize as well as critiques from all over the world as to why he didn’t help the starving child after he photographed her. He committed suicide soon after he received his award for the picture in question, called “the best technical photo ever published.” Christians, however, argued this photo does not meet the criteria of aletheia as truth on a deeper level, but it is rather just “a mirror of reality.” Christians further argued that the Pulitzer Board gave Carter the award based on their limited definition of truth.“Aletheia, authentic disclosure, insists on truth in context, on seeing beneath the surface to the heart of the matter,” Christians said, asking for “a deeper reading of the little girl’s suffering” by communicating the circumstances surrounding the people in the region. “In the esthetics of aletheia stories that produce only pity are unacceptable,” he said.

The third example was WikiLeaks – the biggest organization disclosing truth in the 21st century, releasing secret documents from all over the world. Christians showed a Wiki video of the killing of two Reuters reporters in Iraq by US air forces. “What is truth in international context as authentic disclosure?” asked Christians as the video stopped playing. Christians commented on the structure of WikiLieaks and its manner of disclosure of information without questioning the motives of the people who leak government and corporate secrets, the publishing of big amount of data without putting it in context or checking the facts as well as the anonymous sources the organization uses. “For aletheia the raw and naked release of material as in information flow is unacceptable,” he said. WikiLeaks can be used for occasional leads, but not for the mainstream journalism, he concluded.

“Journalists who practice aletheia are not doomsayers or self-righteous moralizers. They cut through the turbulent surface to the issues underneath,” said Christians in conclusion. “Getting to the heart of the issue is enormously difficult in the global media age. Penetrating beneath the rallying surface is hard under any circumstances, and especially with sophisticated technology. The overwhelming power of instrumentalism traps technology within its efficiency, making us satisfied with means rather than ends.”

Clifford Christians is a renowned figure in the contemporary study of ethics and the philosophy of technology. He is a part of the Institute of Communications and Research in the University of Illinois and author of multiple books on the above topics. He is also a former professor of Robert Fortner who introduced him as “The father of Media Ethics study in the US.” 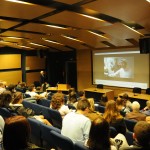 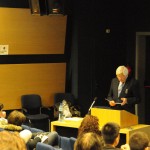 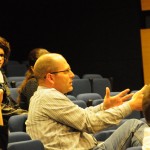 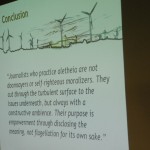 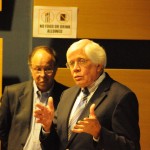