10th – 11th Century Byzantine Architecture in the Balkans & Its Armenian Counterpart: The Enigma of Similarities by Armen Kazaryan 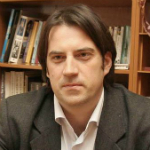