Sasha Bezuhanova is an initiator and founder of MoveBG – an online civic platform for democracy, public discussions and debates on national policies for development.

In 2006 Sasha succeeded in attracting a huge investment project in Bulgaria – “Hewlet-Packard Global Center for Remote Services”, which currently employs about 5000 people. This strategic project marked the country on the world IT investment map. This way HP became the biggest company in the IT industry and among the 5 biggest employers in Bulgaria.

Sasha Bezuhanova also has a significant impact for the development of ICT (Information and Communication technologies) in Bulgaria. The National ICT strategy has been developed under her management. She is the chair of the Board of Trustees of Sofia Technical University, member of the Board of Trustees of the American University in Bulgaria, and honorary chair of the Bulgarian ICT cluster. As a president of the Executive Board of Junior Achievement in Bulgaria, Sasha Bezuhanova works for the development of leadership and entrepreneurship skills among Bulgarian youth.

Sasha Bezuhanova is a founder, board member and chairperson of the Advisory Board of the European Center for Women in Technology to the European Union. She is a founder and chairperson of the Bulgarian Center for Women in Technology. Inspirited by the Digital Woman of Europe Award, in 2013 founded the Entrepregirl award for girls interested in entrepreneurship and innovation technologies. 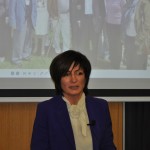