What:    The Hero and the Monster. The Idea of Political Power in the Classic Tragedy and its Modern Interpretations.
When:   09 April, 2014, 19:00
Where:  Sofia University Rectorate, lecture hall 224 (hall America for Bulgaria)

The lecture will explore the idea of the political community in Ancient Greece while focusing on pieces of classical tragedies and in particular on Sophocles’ ”Oedipus the King.” Sophocles’ interpretation of the myth for Oedipus will be examined as a political text, which implies a particular thesis about the political power.  The goal of the analysis is to contribute both to the initial structural characteristics of the European idea about politics and to the uncovering of the mythical models, which contribute to the idea’s formation.

Boyan Manchev is philosopher, Associated Professor at the New Bulgarian University, guest Professor at the Sofia University and UdK Berlin and former Vice-President of the International College of Philosophy in Paris. His research in the fields of ontology, philosophy of art and political philosophy develops the perspective of a new materialism. Among his last books are Logic of the Political (Sofia, 2012), Miracolo (Milano, 2011), Out of Time (Sofia, 2011), L’altération du monde: Pour une esthétique radicale (Paris, 2009); La Métamorphose et l’Instant – Désorganisation de la vie (Paris, 2009). 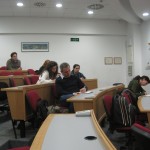